With the twenty-fourth pick in the SBNation Mock Draft, the Portland Trailblazers, represented by SBN's very own Blazers Edge, select... (Drum Roll please)

From Dave @ BEdge: If the Blazers end up with the 24th pick on Thursday it means that they tried and failed to move up for a player they really want. That being the case, Portland would be more than happy to sell this pick in order to recover more cap space this summer. The Blazers will be under the cap anyway but the Darius Miles contract going back on the books ate a large portion of their potential play money. Even a million or so could make a difference in swinging a trade for a veteran point guard. If it's permissable, the first option would be to dump that pick on Houston.

If that will disrupt the draft, then of the remaining players Portland would probably go for Darren Collison of UCLA. He's a defensive-minded point guard who hits a good percentage of his shots. He's too skinny, turns the ball over too much, and will need to adapt his game to the pros. Portland may well invest three years in him and come out with nothing but a semi-adequate back-up. Having already paraded a litany of young point guards through the town this isn't a pleasing prospect. But beggars can't be choosers and the Blazers do need help at point. 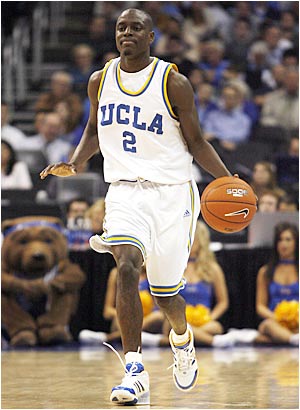