With the 12th pick in the 2009 SBNation Mock Draft, the Charlotte Bobcats, represented by David Arnott from Rufus on Fire, select... (Drum Roll please)

The Bobcats need a defensive stopper more than anything else out of their two guard slot, and Henderson is the player on the board most likely to fit that role. Paired with DJ Augustin, he won't be required to score much at first, but could develop into a better than average scorer off the dribble within the next few years. He'd likely come off the bench this year and would have the opportunity to start when Raja Bell leaves following the season.

And more from IcemanCometh, who loves him some Dookies: During his career at Duke, Henderson displayed the kind of defensive ability that the Bobcat's need at this position, often using his length and strength to press ball-handlers, cut into passing lanes, and battle down low on the block. During his junior season, Henderson's offensive production picked up as well, making for a terriffic showing during the ACC season in which he averaged 19.1 points, 5.4 rebounds, 3.0 assists, 1.4 steals, and a team high 1.0 block. Offensively Henderson came into his own during the 2008-09 season, often using his speed and athleticism to get to the rim, as well as showing a much improved mid-range and three point shooting game. While Henderson will not be a go-to scorer in the NBA, he should be able to put his toughness, athleticism, and defensive ability to good use on this Bobcat's team next year. 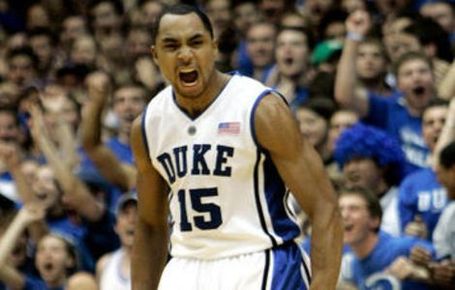