With the seventeenth pick in the 2009 SBNation Mock Draft, the Philadelphia 76ers, represented by the crew over at Liberty Ballers, select... (Drum Roll please)

From, TAFKAMB, with a bit of help from jsams: With the 17th pick, the Philadelphia 76ers select point guard Eric Maynor from Virginia Commonwealth University.

The Sixers had two pressing needs going into the draft: future point guard and three-point shooting. From the looks of it, Andre Miller will not return as the Sixers point guard, and having watched Lou Williams play his entire career, I can say with a fair amount of certainty that he is not a championship point guard. The Sixers were also the worst outside shooting team in the league last year, but somewhat addressed the issue by acquiring sharpshooter/awful defender Jason Kapono. With the three-point situation somewhat settled , and most of the top tier guys off the board, we go for the best point guard available.

Maynor is not Ricky Rubio, Brandon Jennings, Ty Lawson, or Jonny Flynn. He did not play against top flight competition game in and game out. But when I watch this kid play, I see an NBA point guard. Maynor has good size at 6'3'' but only weighs in at 164 pounds. However; with a 6'3'' frame, he's bound to fill-out sooner or later. Eric had a solid 8 reps of 185 at the combine -- more than Earl Clark, Demar Derozan, and Tyreke Evans. The casual fan remembers Maynor sinking a jumper to down Duke in NCAA tournament his sophomore year, but that was two years ago, and his game has significantly improved.

Maynor is a winner who does not have a glaring weakness in his game. I would compare him to a more athletic Eric Snow with a better chance at improving his outside shot, but less talented defensively. At the moment, his range does not extend to the NBA three, but his midrange game is very solid. He posted impressive percentages at VCU, shooting 46% from the field his last two years and 38% from beyond (80% from the line). Due to his role as both a distributor and creator, his turnover numbers are higher than I'd like, but I would expect them to decrease in Philadelphia.

In newly appointed head coach Eddie Jordan's Princeton offense, Maynor would not be required to run traditional sets. His versatility and height advantage suit EJ's system, and I expect him to compete for time right away. He's a senior, he's polished, and he knows how to play with a big man (Larry Sanders), so the transition to Elton Brand should go smoothly.

We're more than a few pieces away from being a serious contender in the East, but if Jordan integrates Brand into the offense and the team buys into his system, Eric Maynor can offer valuable minutes to this team even as a rookie. I'd be happy to see the Sixers nab him at pick 17. 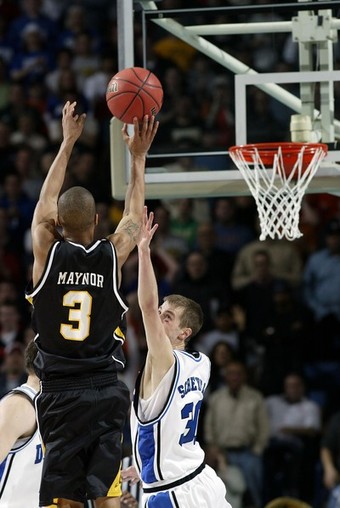 Going to need Iceman's expertise, but apparently this was some sort of game winning shot?