With the eleventh pick in the 2009 SBNation Mock Draft, the New Jersey Nets, represented by RU's very own Aisander "IcemanCometh" Duda because I don't know any Nets fans/bloggers, select... (Drum Roll please)

For the 11th pick in the 2009 SBNation Mock Draft, the New Jersey Nets select.... Jonny Flynn!!! Hi there Nets fans, I'm Aisander Duda aka IcemanCometh, a long time reader/commenter on Ridiculous Upside and many of the other wonderful SBN blogs. Because no Nets blog exists within our network and Scott couldn't find anyone else who is a Nets fan (presumably they've all moved to Brooklyn), I've taken the reins for this mock draft pick.

Jonny "I'm Basically Canadian" Flynn is an easy choice here. Just check out who the Nets had in their line-up last year:

I think it's relatively safe to say that they are pretty set at SG, as Vince Carter showed signs of giving a rats ass for the first time in years during the 2008-09 season, Chris Douglas-Roberts had a decent rookie campaign and Trent Hassell's lifeless body showed up occasionally too. The PF/C rotation is looking nice as well. The Nets boast a wonderfully young and energetic frontcourt, featuring rookie standout Brook Lopez, Josh Boone, future bust/decent player Yi Jianlian, and future Zach Randolph prototype Sean Williams. Needless to say, there is a lot of youth and size already on this squad, which kind of creates a backlog for any possible draft choice taller than 6-6.

Despite his best efforts, Keyon Dooling is not the answer as a back-up PG. And unless the Nets' brass plan on playing Harris for 46 minutes a game and drafting yet another wing player for Vince Carter to cuss out in practice, they desperately need another playmaker coming off the bench. This selection also opens up the possiblity of the Nets going small with a line up of Flynn/Harris/Carter/Yi/Anderson (or Williams).

It's for this reason that I have selected Jonny Flynn over the likes of James Johnson, Austin "I'm basically 14" Daye, and DeJuan Blair. Flynn is a fast, strong, and an active playmaker/scorer. He brings some stellar court vision and handling with him to the New Jersey (Brooklyn) Nets, which is exactly what they need off the bench behind Harris. He may be one of the shorter PGs availble at this spot, measuring out just above 5'11" at the combine. But his wingspan (6'4"), speed (10.86 Agility drill), and athleticism (40" Max Vertical) make him much more desirable than then other lot of almost-not-quite-6-foot wonders.

So there you go Nets Nation (all 6 of you reading this), your selection for the 2009 SBN mock draft is Jonny Flynn and his huge, playmaking guns. 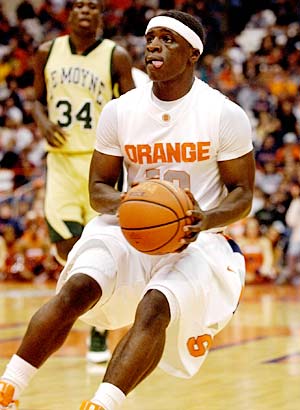