With the twenty-second pick in the SBNation Mock Draft, the Dallas Mavericks, represented by SBN's very own Mavs Moneyball, select... (Drum Roll please)

From MM:The Mavs chatter leading up to the draft has been 'point guard, point guard, point guard', so a polished, safe, and low ceiling pick like Darren Collison could make sense here if Dallas were looking to draft strictly to fill a perceived hole. However, I don't think Dallas would be able to pass on lottery talent at 22.

Dallas selects Terrence Williams, and there is much rejoicing.

The Mavs are looking for immediate help in this draft, and you may think a post presence or Kidd replacement are the only options. Don't forget that Antoine Wright was theMavs primary starter at the two last season. Wright was praised by his coaches for his defense all season long, but you only had to watch him get exposed by Denver in the postseason to see he's merely an average defender who may look a little better compared to his surroundings.

Williams could seemingly replace Wright in the starting lineup from day one. His superior athleticism projects him to be a better defender than Wright, and a chance that he may already be. Williams biggest deficiencies, scoring and shooting percentage are also the weakest points in Wright's game. Unlike Wright, Williams is able to make up for it with his rebounding and passing -- 8.6rpg and 5.0 apg last season for Louisville.

I think it's very unlikely that Terrence Williams makes it this far on draft day, but if he does, I'll be shocked and pretty angry if Dallas passes. 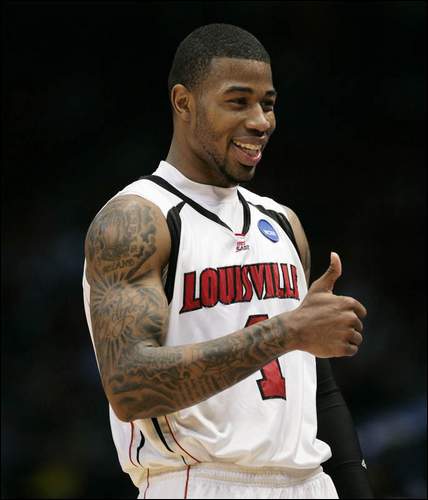