Due to me having no idea what's going to happen with the Timberwolves pick at 28 (Do they keep it? Draft a big? Draft a point? Draft and stash an overseas player? Sell it? Trade it? the options are ENDLESS) and  a lack of return emails (not naming any names, specifically of the scientific variety), this mock draft is going to go on hold.  In the mean time, Silver Screen and Roll for Lakers info (29th pick),  Fear The Sword for Cavs info (30th pick) and the BDL Mock Draft with SB Nation picks.

Though it may not be at pick number 27, the Rockets are looking to buy a late first round pick or early second round pick in this year's draft. But because we are assuming that Memphis is a possible suitor at 27 (or, rather, since we've run dry of Grizz bloggers), with the pick, the Houston Rockets, represented by the Tom Martin over at The Dream Shake, select shooting guard Marcus Thornton of LSU.

The Rockets don't have too many holes to fill, and adding the best guard available, Nick Calathes, as a possible Euro option was certainly intriguing. But GM Daryl Morey likes our current point guard situation (especially Kyle Lowry) so much that he'll address our foremost need, that being the shooting guard position. Houston's best case scenario is that Tracy McGrady comes back healthy and produces from the 2-guard position. But if that doesn't work out, adding Thornton to the mix of shooting guards on our roster would be a smart decision. He would push James White for his roster spot right off the start in camp, assuming we don't re-sign Von Wafer. If Wafer stays, then one of the three may not make the team, but at least the Rockets will give themselves as many options as possible.

Drafting a center, such as Josh Heytfelt, to back up Yao Ming was also an option here, but the Rockets will most likely address that need in free agency. 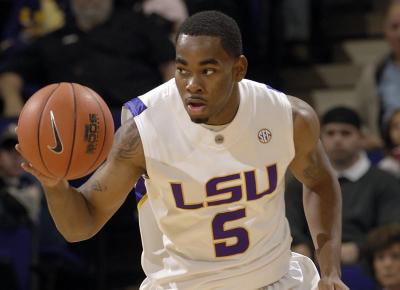