Share All sharing options for: D-League Draft In Review, 2008 Edition 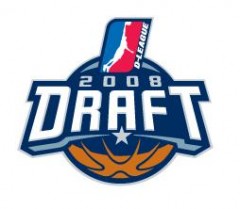 Yesterday, Jon L had a great comment when I posted the first pick of my re-draft:

That's actually a tricky variable to the draft that speaks to the sort of limbo many D-League teams find themselves in - it's true they already have seven players before the draft, but should they roll the dice and grab an NBA guy who isn't likely to be on the team for very long, or go with a still-talented-but-safer pick and ensure the team will have solid players for the entire season?

Personally, I think it's better to pick the most talented player that fills a role that needs filling, regardless of call-up probabilities.  For one, if a team can get off to a hot start before 10-day's start in mid-January, nearly a third of the season is already in the books.

After that, if the player gets signed for the season in the NBA, the team will move to the top of the waiver priority list, giving them a pretty good opportunity to pick up a player that can fill the role rather capably (example: If Idaho would have waited three days at the top of the order, Pops Mensah-Bonsu would have been a pretty good replacement player.)

Anyway, his comment got me to thinking quite a bit, leading to me doing the entire re-draft last night.  Continue on for the results of that along with my steals and duds of each round.  Scandalous!

First, here is the format: Picks are in order of selection.  Original pick in parentheses. Next line - guys that seemed they could contribute to the team that were either allocated or returning. Last, my reasoning for new pick.

Tulsa needed a big, and Davidson was the best big in the draft.  It doesn't seem like Closs ever planned to play in the league, leaving them with three 6'8" bigs. I felt with Jermareo, that'd be a dangerous front line. I think there were enough wings that that could have probably waited until the 2nd round, whereas a center was much more rare.

Colorado knew Gill was on his way so biggest need was a swingman.  Jeffers brings defense and is a gritty "Coloradoish" player. Plus, and possibly more importantly, it would have combined my man crushes.

Lance Allred came right after draft, so Idaho needed a 3/4.  James Mays, before his injury, was probably the best player in the league.

With that returning lineup, Sioux Falls was only really lacking at the power forward spot. With Richard just getting cut from Twolves and the Skyforce being a Minnesota affiliate, this was just a logic pick.

This one will be quick - they needed a 3 or a 4, and Noel was Best available.

Fort Wayne really need a big to compliment Hunter, and Collins was probably most talented left, but I think that Byars really would have given them a much more dangerous team.

Needed a big, but there aren't any left that I like.  As much as I wasn't a fan of Daniels, he showed to be solid in their lineup as a "center."

For reasons unknown, this team blew up in a hurry.  Had those four, Kedrick Brown and Marcus Campbell played together (Brown and Campbell returned early in the season), Anaheim would have been scary.  Unfortunately, they were scary, but for the wrong reasons.

They had NBA help coming at all other positions - Parker might not have fit in all that well, but this would have been a fun team to watch!

Forbes is a stud.  Antonio Meeking isn't.  Russell Robinson would have been a nice pick here, but Reno was able to get him in the second round anyway, so we're keeping him there.

Only need was height.  Looking at injury troubles, Taj MacCullough would have been a good pick as well seeing as he was with the NBA's Wizards in the preseason, but I think personalities would have clashed.

RGV needed a point guard, but Tierre Brown was terrible and Russell Robinson is a much better distributor than scorer.  Unfortunately, they didn't have anyone great that could score.  Cartier Martin would have shored that up.

Could have used a point guard, but I like Taj.  Hell, I like a lot of people more than Jasper Johnson.  I would have put assistant coach Chucky Brown back on the court if that was an option over Jasper.

They had a really good pick originally in Noel (but then randomly traded him?)  I think Meeking would have done well here with Noel off the board.  He played well in this system after being traded for Noel, anyway.

Iowa got a steal in Martin - Brown wouldn't have been much of a drop off.

Looby was very unpolished, but could always block and board.  I considered a point guard here, but I think that Williams played well as a point-forward and Looby was probably the best available player that seems like he wouldn't screw up the chemistry.

BONUS: Steals and Duds of each round!